What is missing in current ethics?

What is missing in current ethics?

Any true ethics must be universal and planetary, it must include all life forms, it must be interscalar.

There is no interscalar vision. As a matter of fact, all notable systems of moral rules only speak of relationships between humans. But we cannot develop a genuine ethics if we consider humanity alone.
Not too long ago, it was customary to massacre native American Indians because they were classified not as human beings but as wild animals.
During the Second World War, “annihilation and extermination rhetoric” was tolerated at all levels of the U.S. society. According to the British embassy in Washington, Americans regarded the Japanese as “a nameless mass of vermin”. Caricatures portraying Japanese as less than human, for example as monkeys, were common. A 1944 opinion poll, that asked what should be done with Japan, found that 13% of the U.S. public were in favour of “killing off” all Japanese men, women, and children. Is this not reminiscent of Nazi propaganda? What is the root of megalomania, national hatred, extreme collective aggression, dehumanization and mass murdering?
Any true ethics must be universal and planetary, it must include all life forms, it must be interscalar.
An interscalar vision does not only consider the existence of different scales, but learns to recognize and respect life in all scales because life is interscalar communication and cooperation.
The interscalar vision of life allows us to recognize our planet as a life form – not just the biological organisms that inhabit the biosphere, but also those of the atmosphere, the hydrosphere and the lithosphere are integral parts of a larger life form. According to the interscalar paradigm, the solar system is alive, even the galaxy and the universe are life forms.
The interscalar view of life and the interscalar concept of ethics are essential for the survival of humanity. This change of the paradigm in science is therefore very important for our future. We need to change our vision of the world, to reach a new understanding of life in order to realize the importance of life in the universe.
Only when our children can develop an interscalar consciousness and learn to respect life in all scales, and only when this view is supported at home, at school, in the cinema, the supermarket and the internet, can our ethical consciousness increase and will war cease to be an option for human relationships.
New science for life in peace – that is our commitment.
n. Naturally he knows, that the Christian religion teaches to respect and to love your fellow man. Nevertheless, he obeys the inhuman military order and bombs a city, knowing full well that he cremates thousands of harmless people, also children and infants. In his consciousness he did his job as a soldier, and he was awarded and became a national hero. This fact is absurd, but it is very important to understand, why it could happen, otherwise this dark side of humanity’s civilization will never end.

The main question is, why are highly educated individuals, scientists and engineers able to violate basic humanistic principles? Surely, the patriotic American pilot would not be able to bomb his own house, killing his own family. Why, then, was he able to drop the bomb to kill thousands of Japanese children?

The cause of this terrible ability is a profound limitation in the scale of one’s ethical consciousness. The current vision of the human being sees everybody as an individual and does not go beyond the system of moral rules that have been created to control people. Power neither knows ethics nor morality.

Beginning in the spring of 1945, John von Neumann, mathematician and physicist, inventor and polyglot, was included in the Target Selection Committee responsible for choosing the Japanese cities of Hiroshima, Kokura and Nagasaki as the first targets of the atomic bomb. Von Neumann and other scientists and engineers oversaw computations related to the expected size of the bomb blasts, estimated death tolls, and the distance above the ground at which the bombs should be detonated for optimum shock wave propagation and thus maximum effect of destruction and mortality.

Indeed, Hiroshima and Nagasaki became military scientific research objects in the interest of political and economic power. On August 6, 1945, an American B-29 aircraft carrying a nuclear bomb was accompanied by two other B-29s. One of them carried instrumentation for measurements of the effects of the explosion, and the other was the photographer’s aircraft.

The history of the war did not end in 1945, but it continued in Korea, Vietnam, Afghanistan, Iraq, Yugoslavia and today in Syria where the international power players test modern weapon systems killing thousands of innocent men, women and children. This practice is an outrageous violation of the United Nations Charter that prohibits the use of force in international relations.

How can we maintain peace on Earth and develop relationships of responsibility and respect? What can we do? What is the solution?

First of all, we must become conscious of the fact that humankind can only survive if it is able to live ethically. Only then will our humanity reach cosmic consciousness and become an integral member of the galactic life space. For this reason, we must develop a scientific vision of ethics which is based on the laws of the universe.

Go to the page 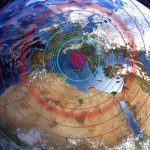